Vantablack BMW X6: A Vehicle So Dark, It Resembles Gazing Into A Dark Opening

by admin
in Automotive, Technology
0

Vantablack is the darkest version of black ever created. It’s described as the “world’s darkest material,” or the world’s “blackest black,” and it’s essentially a film of carbon nanotubes that captures light but doesn’t let it escape. Vanta is short for Vertically Aligned Carbon Nanotube Alloys, and it was first created by British engineers from Surrey NanoSystems in 2014.

The Significance of Domain Rating Scores on E-Commerce Websites 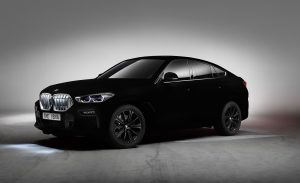 The carbon nanotube material coating absorbs 99.965% of incident light radiation, which includes visible light and other common frequencies like microwaves and radio waves, meaning your eyes essentially can’t see it. It’s so black you are pretty much looking at a void from which no light can emerge. “When a light particle hits the material, it gets between the tubes and bounces around, is absorbed and converted to heat. Light goes in, but it can’t get back out,” explains Ben Jensen, Surrey Nanosystems‘ chief technical officer.

This surreal special effect of a black coating that sucks in almost every photon of light that hits it is normally used for smaller purposes like to reduce reflectivity around sensitive cameras and sensor systems that power semi-autonomous driving.

If it were to be used on something big, it would make it look like a hole was cut into the universe since any 3D object coated in Vantablack loses its appearance of shape as there’s no light and shade to define it. Well, lo and behold, Vantablack has finally made an appearance on something big to blow us all away. The new BMW X6 show car! What else would be worthy of such a color but a nice fancy vehicle?

For this special project, Surrey Nanosystems didn’t use the blackest formula it has. Instead, it created a whole new black paint version – a sprayable VBx2 formula that actually reflects one percent of the light that hits it instead of sucking up 99.965% of all light like the original Vantablack recipe. This new carbon nanotube coating is the blackest paint ever made.

As stunning as the color is on the BMW X6, Jensen doesn’t feel like it’s ready for the road just yet. He said, “developing a Vantablack VBx2 car paint durable enough for daily use is a huge technological challenge.”

So, for now, we have to be satisfied with being able to admire the one-of-a-kind, world’s first Vantablack vehicle and hope that someday we’ll get to see one of these Vantablack BMWs in person, rolling down the road like a 550-horsepower wormhole to another dimension, its shape only defined by its reflective windows, headlights, taillights, badges, exhaust tips, license plate, and monstrous kidney grille on the front lit up and hanging in the blackness of starless space. Here

What is The Infinite Banking Concept? What Are The Pros and Cons?

Everything You Need To Know About the Purple Haze Strain

Best Gifts to Give Your Husband